There really is something magic about this Vanilla Magic Custard Cake, the way it seperates in the oven from one cake batter into 3 completely distinct layers.  The first is a fudgy base layer, followed by a thick custard layer, and topped with a layer of what could possibly be the lightest cake you have ever tasted. 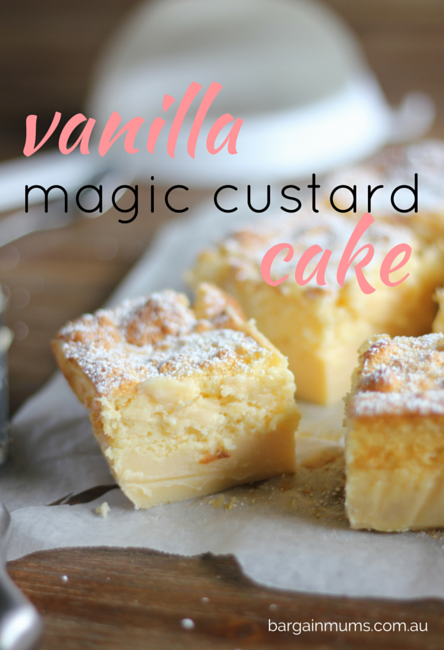 Making the batter is a little strange, and is a completely different process to most cake recipes.  You might even doubt that it is going to work, with the batter being very runny and lumpy.  But trust me, put it in the oven anyway and there is a good chance a lovely 3 layered cake will come out of the oven.

To make the cake, first of all separate the eggs, putting the egg whites into the bowl of a stand mixer, and the yolks into a large mixing bowl.  Beat the egg whites until stiff peaks form.  Next, add some sugar to the egg yolks and whisk until well combined.  Add some melted butter and vanilla extract and whisk again.  Gradually add plain flour and lukewarm milk, alternating between the two.

Now, add the egg whites to the egg yolk mixture and gently fold through.  You want to be very gentle at this point as you want to keep as much air as possible in those egg whites; I find a spatula is the best way to fold the egg whites.  Finally, pour the mixture into a lined square cake tin and bake until golden.  Let cool completely before dusting with icing sugar and serving. Preheat oven to 160c. Line a square cake tin with baking paper.
Separate the eggs, putting the egg whites in the bowl of a stand mixer, and the egg yolks in a large mixing bowl. Beat the egg whites until stiff peaks form using a whisk attachment. Set the eggs whites aside.
Add the sugar to the egg yolks and whisk until well combined, then add the melted butter and vanilla extract and whisk again. Gradually add the flour, whisking well between each addition, then repeat with the milk.
Gently fold the egg whites into the cake batter. Pour the batter into the prepared cake tin for 45 minutes, or until the top of the cake is golden. Dust with icing sugar before serving.

We're not around right now. But you can send us an email and we'll get back to you, asap.